In San Diego this year I spent a lot of time at the Geek & Sundry offsite events at Jolt ‘n Joe’s. I have become a big admirer of Felicia Day and the things she creates so I took this rare opportunity to absorb all I could during my time in San Diego!

I took lots of photos. Here are some from the Geek & Sundry events and a little bit of Nerd HQ too. If you are planning to go to an event always plan ahead. If you have time, go there before the event to check the location in advance, so you don’t get lost and turn up late when it starts. Here is Joes before G&S arrived. 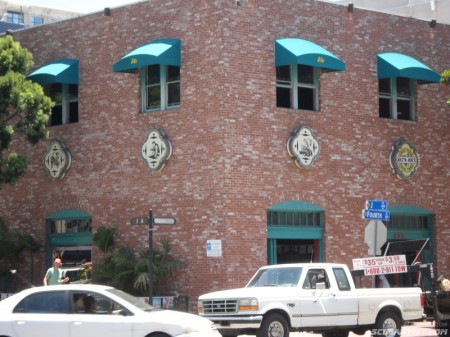 The first event was a Felicia Day meet and greet. I made sure I was early. A queue was already forming which went around the corner too. 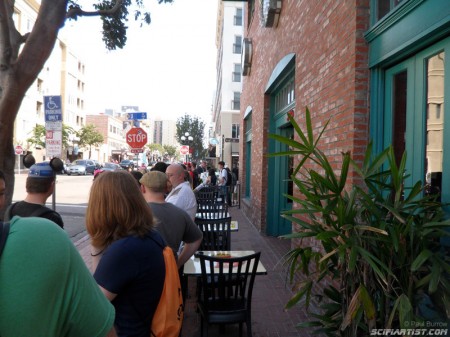 Waiting for Geek & Sundry meet and greet with Felicia Day 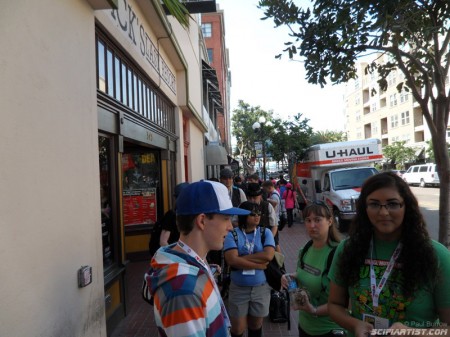 Queue behind me started to get bigger! 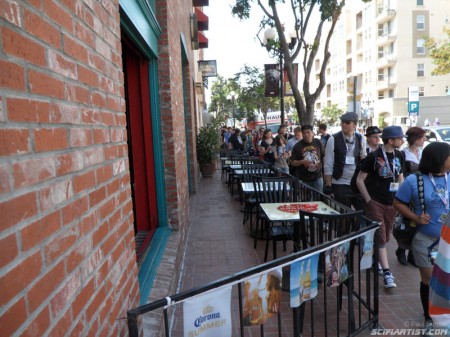 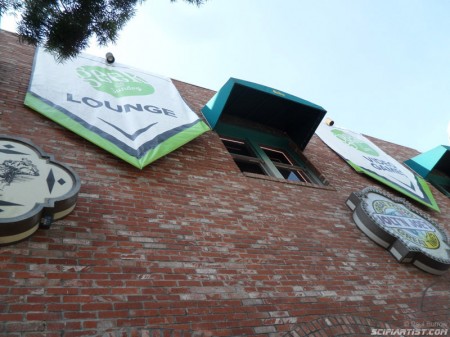 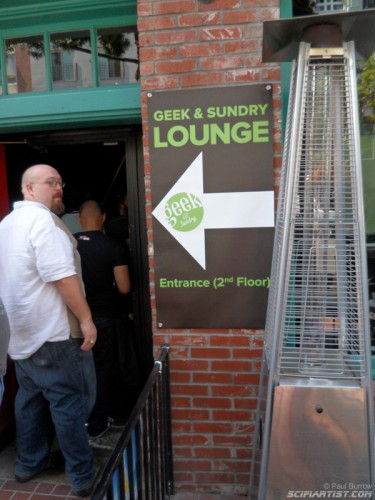 I see the entrance!

Inside was a cool area with a bar, lots of comfortable seating. Items for sale and a small stage area with the coolest Geek & Sundry logo. Well done to whoever made that! 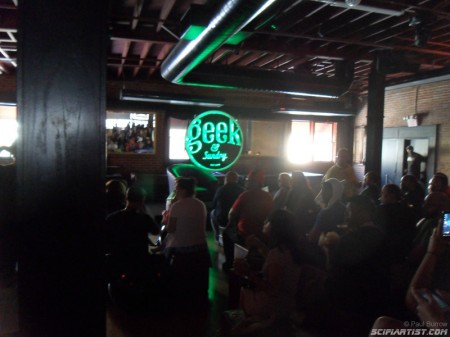 Inside the Geek & Sundry lounge 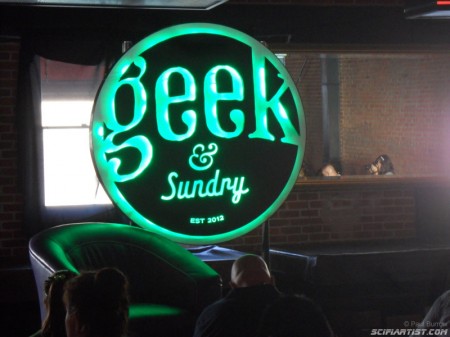 Felicia came on stage and entertained the crowd which was a great start to the event. This was followed by a signing. 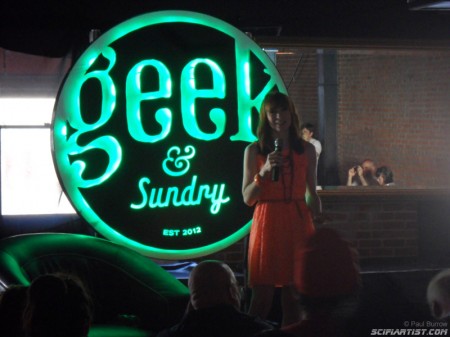 Later that day Jenni Powell introduced the current vloggers who chatted and answered questions. I wanted to ask questions but my mind went blank. Sorry guys 🙂 Jenni gave me a shout-out and I waved to the crowd. Thanks Jenni, wasn’t expecting that 🙂 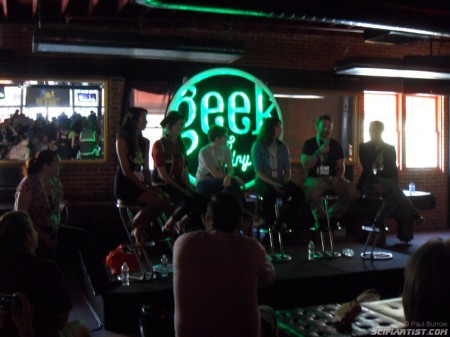 In the next room was a gaming area sponsored by AMD. 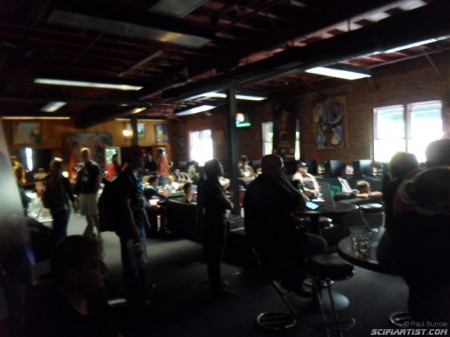 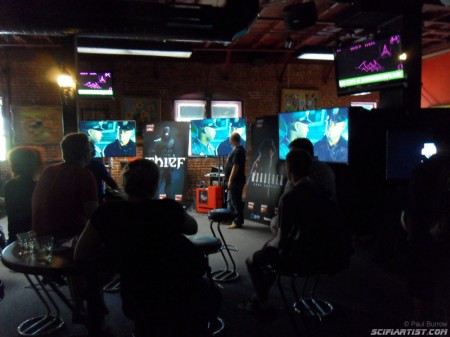 I played some great games. Should have turned flash off 🙂 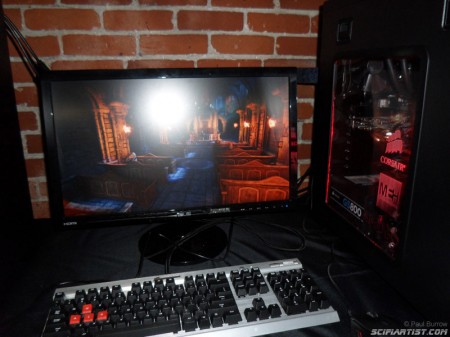 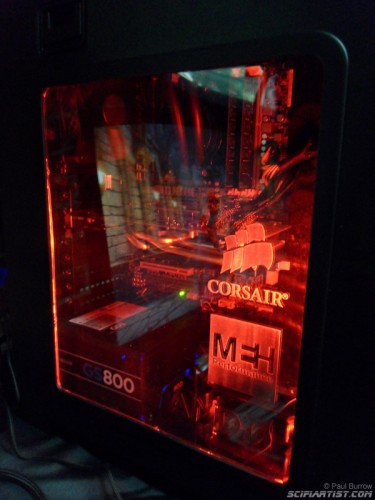 Nice machine to play on!

I watched Rock Jocks while I was there on a different day. The film was really funny, entertaining and had a lot of bad language with Sci-Fi and a smoking Jesus alien. Some of the cast watched it with us! Felicia kicked ass! What more could you ask for? We were also treated to meet the cast and get more signed goodies!

Go to http://www.rockjocksthemovie.com/ for more information! 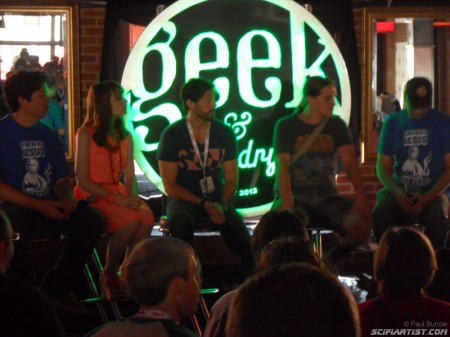 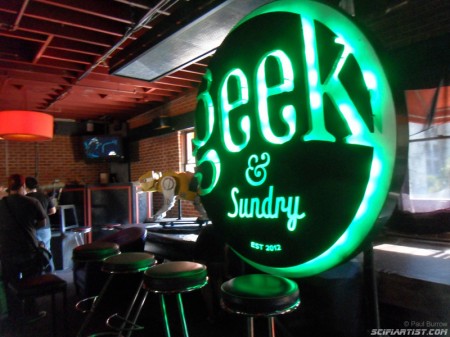 Still mesmerized by that logo

As part of the Geek and Sundry Vlog channel potential vloggers were involved in live google hangouts recently. Here is the one I was involved in. I had a great time participating in this. It was amazing to actually be a part of one of these hangouts instead of just watching one!

So I got through to the top 30! Woohoo! Now there are 9 days to vote to determine the final 10 who will get a regular spot on the Geek & Sundry channel. Don’t forget you can vote once a day!


I don’t have a massive following so every vote counts. At this rate I’ll be handing out flyers at Comic-Con next week 😀


Anyway here’s the link to my second video. This follows on from my first where I drew Felicia Day. Because of your votes you decided she should be painted as a robot. This is the video I created while I did it!


Thanks for watching and voting! 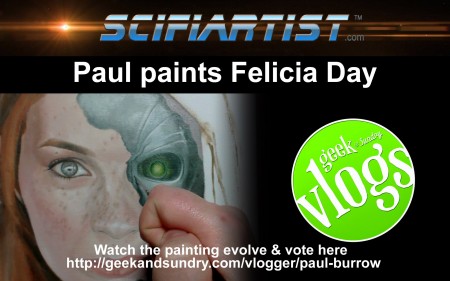 Thanks to everyone who has supported me so far in this quest to become a Geek & Sundry vlogger!
I am very happy to confirm I have been selected in the top 30 to go through to the final round of voting 😀


Here is my original video which got me through the first round. It’s far from perfect but did the job. I’ll be looking to improve key areas in my next video.

Hi Everyone. I have drawn a picture of Felicia Day but I need your help to decide how to finish the drawing before I paint it.

Should she become a Robot, zombie or a reptile?

If you would like to see how I created this drawing click here to watch my Geek & Sundry Vlog. Please vote for me if you like the video as it could give me the opportunity to make more videos for Geek & Sundry.

To help me choose Robot, zombie or reptile click here to go to the Tube page where you can add a comment.

Here’s the drawing so far. 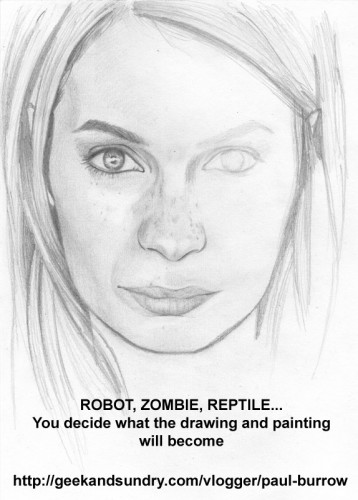