Here is another Avatar character. This one is England & Manchester United football striker Wayne Rooney. This was created for the Facebook group If Wayne Rooney was in Avatar, he would look like this… 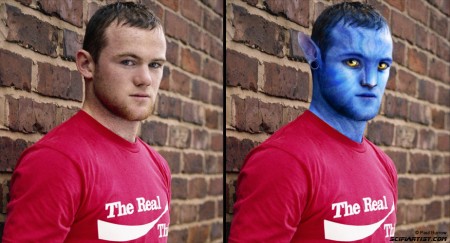 Rumour is that Wayne Rooney is a Leeds United fan and will sign for Leeds when they win promotion to the Premiership next season! 🙂

This clip is the first hint as Rooney accepts a Leeds shirt from the Stereophonics!

I was asked to do several Avatar pictures. The concept was simple, take a photo of an existing person and transform them into an Avatar character.

The first one I did was of Travis Barker, drummer for Blink 182.  I was provided with a great photo to start with from http://www.blink182.co.uk/

I kept most of the photo from the jawline down the same and just coloured it. The top half of the face was reworked a lot more.

I widened the head and the gap between the eyes and created an avataresque nose. I used transparent layers to paint the facial patterns on and just kept going until I was happy with it.