Friday was a lot busier than Thursday, the costumes were out in full force. Pictures will follow as I snapped away at many of these weird and wonderful creations. There was one gigantic Darth Vader and a small boy with a lightsaber approached him. 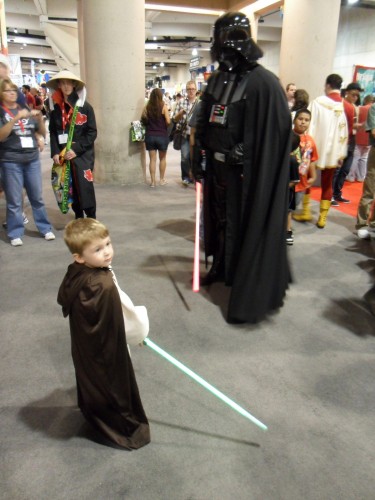 Oi pick on someone your own size 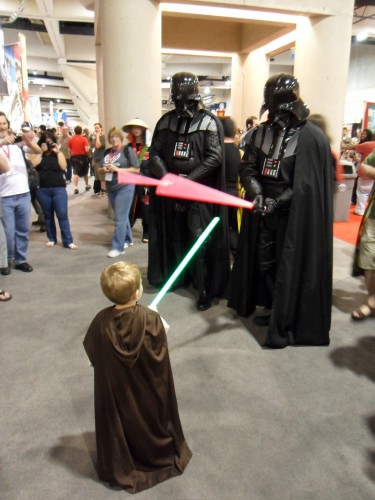 2 vaders vs the boy

Spotted various people today – Star Trek actors William Shatner & Brent Spiner, Ron Glass from Firefly. Stan Lee was ushered past while I was sat in a portfolio review. They had people around them that tried to stop you taking any photos that were “candid” and not posed for.

There are loads of camera crews recording constantly but I recognised a British presenter Rick Edwards from T4.

He was interviewing a rather large guy dressed as the joker so I watched from the background. When they’d finished I approached Rick and cheekily asked if he fancied promoting a fellow Brit. He explained that he was here on a mission to try and get his own comic book published. He seemed interested in my suggestion to do the artwork and he said he would speak to his producer. So I left my card and contact details with him. Nothing may come of it but at least I gave it a go 🙂 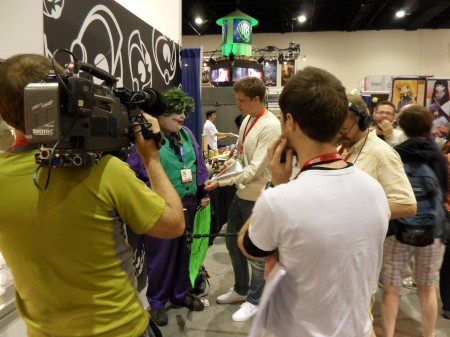 Portfolio reviews were the afternoon agenda. This year on the day in question you add your name to a ticket for the company you want to speak to. Your name is drawn out randomly and added to a list in the order selected, then it’s a case of waiting to see if they have time to see you. It’s brutal but these are the lengths you have to go to just to see an editor or art director. I was No 41 & 69 on the 2 companies I saw on Friday. Eventually I was called for each review, one prematurely as I’d read Paul Burrows as me which is a common spelling mistake but it was my evil American clone so I got in sooner than expected. One was positive the other not so.

I was shattered by the end of the day so back to the hotel and bed – legs are aching after the miles of walking. Shoulder not so bad today. Come on T4 give me a call!!

Travel there – At 4am driving my car down quiet country roads I got swarmed by a herd of rabbits, (Not sure what the correct word for a group of rabbits is – maybe Dave West can answer that?) 🙂 I couldn’t stop in time and felt at least one of the cute fluffy bunnies crunch and pop under my front wheel – yuk – makes me cringe thinking about it.

My engine warning light came on shortly after that so I was worried about actually making it to the airport but all was well in the end. Flights were cramped and long. Had to change planes at Denver due to a technical problem which delayed the flight for a couple of hours, better late than dead I suppose.

At San Diego I shared a minibus/cab with a few others and the crazy driver didn’t seem to know what he was doing – word of advice if you’re ever in the queue for a taxi at SD airport and somebody offers you a “shuttle” instead don’t take it unless you want to be led on a wild goose chase and arrive at your destination slower than you could have walked it. I needed my bed – hotel is cheap and adequate but that’s all I need – oh and free wireless internet of course that allows me to do this at 4am.

Okay whinge over:D – First day of the Con was good.  Collecting my pass went smoothly and I was allowed to pick up My Friday & Saturday passes at the same time – saves me queueing again apart from Sunday. I didn’t find it as overwhelming as last year (My first visit). I wandered around first to take it all in – there is a lot to see and do. Most stands looked the same as last year though I haven’t seen everything yet – still 3 days to go.

I met up with Chris Reilly who was signing for SLG and we hung out for a while. We’re collaborating on a book entitled Grand Theft Robot so it’s good to discuss this in person rather than emails for a change. I bought some books and my bag got a bit heavy, my shoulder is a bit red raw from carrying the Man Bag all day – Neil any recommendations so solve the bag problem? 🙂

I spotted Jane Goldman in front of me in the food queue, she’s quite easy to spot with her pink hair, then I realised she was with hubby Jonathan Ross. Jonathan is not recognised in the US as much as in England so I think he was a bit surprised to hear a call of “Alright Rossy” in an English accent behind him. He politely acknowledged me though before leaving with his order of pizzas.

In the evening I met up with a few of Chris’s friends for a Mexican. Big burrito I had, followed by the strangest party I have ever been to. First of all it was the first free party with free drinks I’ve ever been to that cost $10 dollars to enter & $6 dollars a bottle – bad advertising there guys. The party was outdoors on a large balcony of the Westgate hotel (Quite posh). There was loud music and video being projected onto an adjacent building showing a lot of monkeys amongst other things. We were surrounded by tall buildings and planes were flying in the near distance as they landed at the airport. On a small podium girls with zombie make up and skimpy outfits took it in turns to pose while several people stood around and sketched them. I have pictures. I’ll upload them when I get a chance.

That’s all for now!

I’m thinking of whipping up a few T-Shirts to wear at Comic-Con with the scifiartist logo/website on them. Don’t know whether to go a step further and add some artwork but I like these simple easy to read mock ups illustrated below. 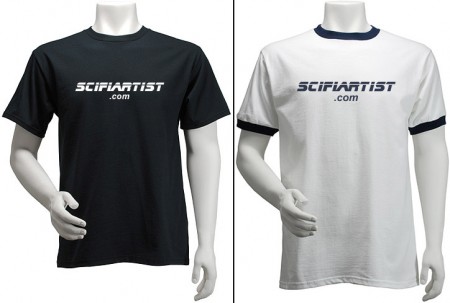